A collection in stone-effect porcelain stoneware, specially designed for the outdoors! An expressive colour palette that brings the best out of a collection of tiles renowned for their practicality, aesthetics and strength. 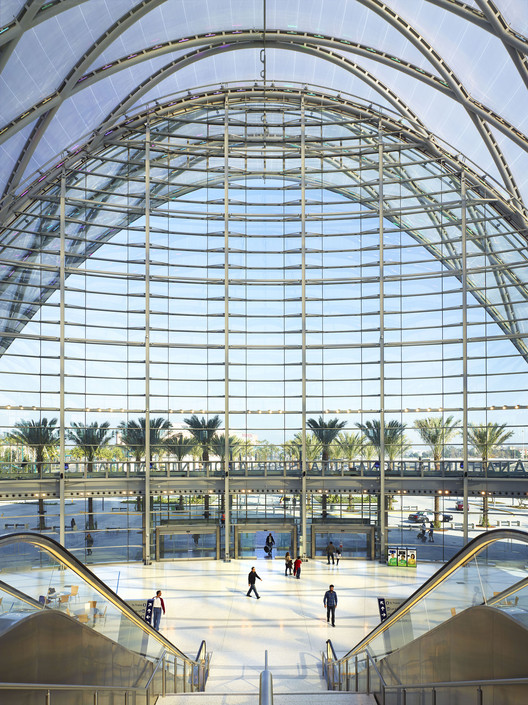 Products used in this Project

Text description provided by the architects. Los Angeles — The new Anaheim Regional Transportation Intermodal Center (ARTIC) sets a precedent for civic-minded transit hubs in the United States. HOK designed ARTIC, which represents the next generation of public transportation in Southern California, as an innovative new transit station that serves as a destination in itself.

“ARTIC is a community-focused building that will change how people think about public transportation,” said Ernest Cirangle, FAIA, LEED AP, design principal for HOK’s Los Angeles office. “This iconic facility is a symbol of a new era of public transit and was only made possible because of city leaders’ unwavering commitment to a contemporary and bold design.”

HOK won an international competition to design the project. Officials challenged the team to create an icon that would welcome a new age of public transportation into the region. The station also was conceived as a catalyst for transforming Anaheim’s core into a pedestrian-friendly zone that promotes connectivity and a vibrant, mixed-use environment. Known as the “Platinum Triangle,” the area around the station includes destinations such as Angel Stadium, the Honda Center, the HOK-designed Anaheim Convention Center and nearby Disneyland.

“The master plan establishes a clear pedestrian pathway flanked by future, mixed-use development with ARTIC as the primary destination,” said Cirangle. “The extroverted building has a significant but welcoming presence and will help spur transit-oriented development.”

The design team used building information modeling (BIM) to develop ARTIC’s complex form, geometry and functions, to navigate the complexities of the building systems, and to study the building’s tolerances and environmental performance. “By using BIM, we were able to optimize and coordinate the precise geometry of the vaulted diagrid shell, ETFE facade technology, metal panel rain screen systems and glass,” said Albert Kaneshiro, AIA, LEED AP, HOK’s project manager. “BIM allowed us to match ETFE connections with the geometry of the steel in a structure that is constantly expanding and contracting.”

Based on the city’s goals for sustainability, the team designed ARTIC for U.S. Green Building Council LEED Platinum certification. The vault-shaped structure acts in concert with advanced mechanical systems to optimize energy efficiency. Inflated ETFE cushions cast a soft, translucent light throughout the great hall, while the additional frit pattern on the outer layer reduces solar heat gain. Convection currents naturally ventilate the building as heat rises from the lower south end up to the north side and out through operable louvers. The radiant heating and cooling floor system and optimized HVAC system will help reduce ARTIC’s energy consumption by 50 percent.

LEDs mounted on the diagrid structure illuminate the ETFE pillows in gradations of shifting colors, providing a striking presence on the night skyline. As darkness falls, ARTIC becomes lit from within and acts as a beacon from the freeways and local streets.

HOK provided architecture, interior design, master planning and urban design services. Parsons Brinckerhoff was the project manager and served as the rail and civil engineer. Other consultants include Thornton Tomasetti as structural engineer, Buro Happold as MEP and enclosure engineering, SWA as landscape designer, and Clark Construction as general contractor. 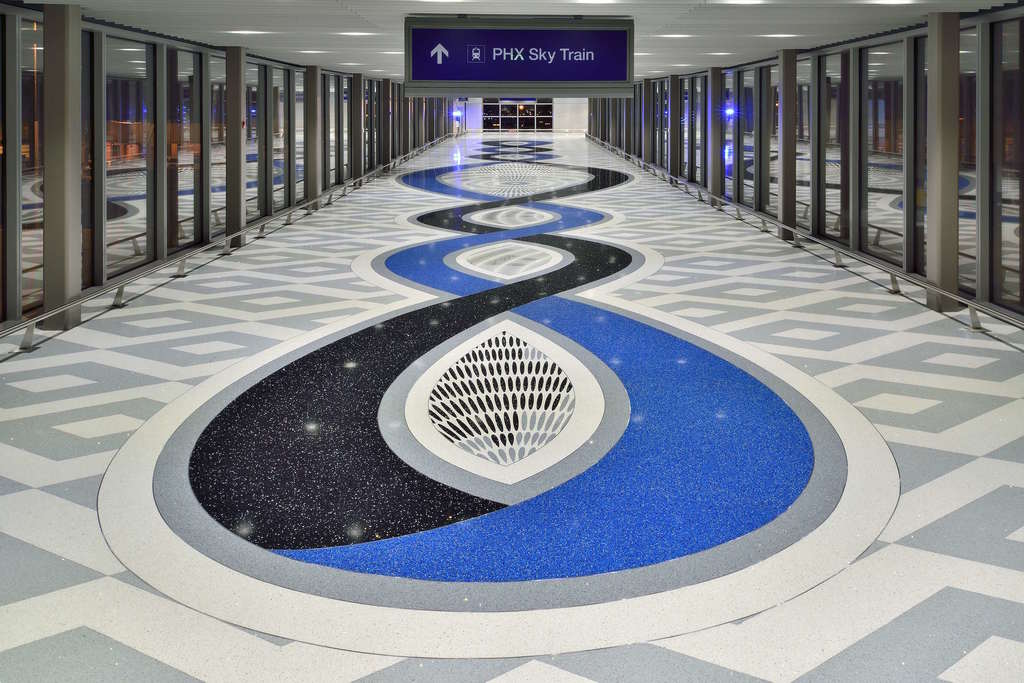 More about this product

Terrazzo & Marble has been awarded for the following airports:

Cli-ker n exterior is a new ceramic flooring system created by PORCELANOSA butech, for quick and
easy, dry installation of exterior floors. No use of mortar or joints needed.
Quick and easy installation, accessible, recoverable, wide range of finishes and minimal maintenance.. Usable
right after its installation.
Advantages
Easy installation
Clean and quick
No maintenance
No adhesives or grout needed.
Anti-slip tile
Adapted to all slopes
Wide range of finishes from PORCELANOSA
Reusable
Frost-resistants tile
Features
The use of cli-ker n exterior system is recommended when the surface to tile meets the following requirements:
Terraces with 1 slope, 2 slopes or 4 slopes, when the angles form 90 degrees.
Tile format: 44.8 x 44.8 cm
5 mm hollow joint between tiles
Machined base and pieces to allow water evacuation

Raised access flooring is a system that came about due to the need to conceal the services typically found in working areas, plant rooms and other areas with different types of cabling, tubing and conduits.

By creating a technical space, it is possible to conceal and tidily arrange all of these services under the flooring.

Areas where the product is used

Raised access flooring is highly recommended in areas with a large number of services or where air conditioning ducts are to be installed.

Go to the Butech by Porcelanosa website for more information

With 4mm of cork that comes from a sustainable source, and a high definition eco-friendly decorative, Wood and Stone Resist + offers a green flooring with extra cork inside and impressive realistic decors.

Refined to be free of harmful phthalates, and thus contributing to a purer air quality, this solution is a distinguished ecological choice amidst its counterparts. Resist+ was specially developed to endure heavy traffic conditions – whether in a lively home frenzied with children or in a public building crowded with busy passersby on their daily commute.

With 4mm of cork that comes from a sustainable source, and a high definition eco-friendly decorative, Wood and Stone Resist + offers a green flooring with extra cork inside and impressive realistic decors.

Refined to be free of harmful phthalates, and thus contributing to a purer air quality, this solution is a distinguished ecological choice amidst its counterparts. Resist+ was specially developed to endure heavy traffic conditions – whether in a lively home frenzied with children or in a public building crowded with busy passersby on their daily commute.

Wood Go are floating proposals that combines the cork layer characteristic of Wicanders´products with a luxury vinyl tile (LVT) layer that provides high realistic wood and stones looks, all this within a budget friendly solution.

Resist range combines unique designs with the comfort of cork. The realistic wood and stone visuals of this collection, with the benefits of cork inside, are the perfect choice to create comfortable, warm and peaceful atmospheres. The protective wear layer guarantees a strong resistance, allowing its usage in heavy traffic commercial areas.