Foster + Partners has completed and reimagined the Apple store in Sanlitun, an urban quarter in Beijing, China. Originally built in 2008, Apple’s first store in China has relocated, in proximity to the older building, taking on more social aspects, and generating a “new dialogue with the surrounding pedestrian streets, addressing the large open square that is a social focus for the district”. 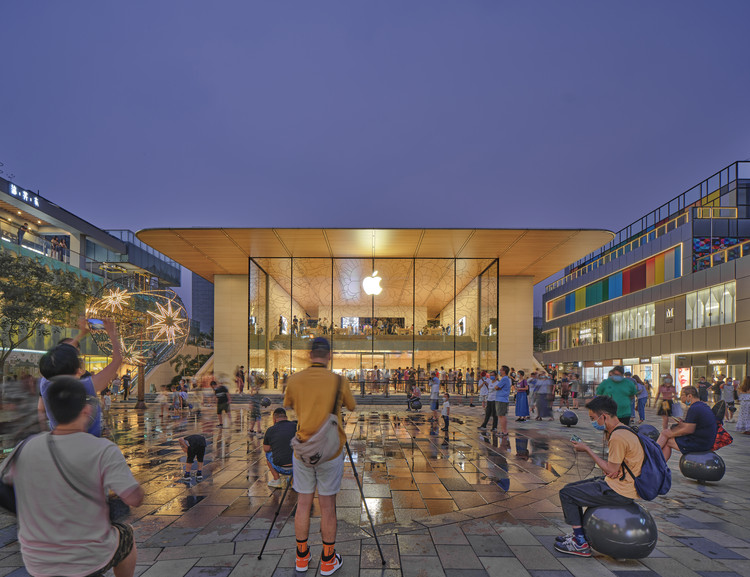 Reimagined by Foster + Partners, Apple Sanlitun has just opened in Beijing, with collaborative design, the result of a close partnership between Apple and the architectural firm. As Stefan Behling, Head of Studio, Foster + Partners stated, “Apple Sanlitun is all about being open and inviting – visually, physically and metaphorically”, the store draws inspiration from the energy of the area, connecting inside and outside spaces.

The architecture puts in place “a porous building envelope that opens out onto all four sides and connects to the multi-layered circulation network”. In fact, the main façade, facing the square, is the ultimate source of natural light for the interior space, while the rear glazed façade is lined with trees. On each side, large staircases lead the visitors towards the Genius Grove.

Featuring a unique structural system that has been used for the first time in China, Apple Sanlitun introduces a Special Truss Moment Frame that resists to seismic forces, while generating a column-free interior space. “Tuned mass dampers reduce excessive vibration in the cantilevered upper level and Buckling Restrained Braced Frames minimize the structural impact on the existing basement”.