UNStudio in collaboration with Johan Cruijff ArenA designed a winning plan for the Korean National Football Centre in Seoul. Focusing on health, wellness, science, technology, education, and promoting a healthy lifestyle, the project was selected as the winning design in an international closed competition that took place in March this year.

Commissioned by the Korean Football Association (KFA), the new state of the art National Football Centre in Seoul will take on two programs, it will become home to the Korean national team and their trainers, as well as a laboratory for future generations helping to foster their careers.

In the conception phase of the master plan, UNStudio gathered a team of industry specialists including an international team of leading football stadium managers, alongside specialists in sports science and digital data collection, to generate a project “based on lessons learned from other top international football clubs and training centers”.

The Netherlands is a very proud footballing nation. We have many top players and trainers in teams all over the globe. As the inventors of ‘Total Football’, to us football is not just a sport; it’s an expression of culture, a science and philosophy. Football brings people together, it provides them with a sense of comradery, of belonging and of national pride. — Ben van Berkel, Founder & Principal Architect, UNStudio.

Located on a 450,427 m2 site in Cheonan-shi, Chungnam-do – the new National Football Centre (NFC) put in place shared facilities for women, men, and youth. Designed to cultivate top league players, the project is also a destination for football fans to enjoy the story of Korean football. Housing two stadiums and over a dozen sports field typologies, natural running tracks and indoor gymnasiums, the intervention is also linked to specialist sports medics and treatment centers. The central public plaza, the focal point of the master plan, is surrounded by the three main buildings, the museum, the indoor stadium, and the outdoor stadium.

In the Netherlands, we understand the importance of training footballers from a young age. We invest a great deal in our youth, as well as in new technologies and state of the art tools and techniques for the education and excellence of football — Ben van Berkel, Founder & Principal Architect, UNStudio.

Finally, for the competition, UNStudio created also an urban branding manual to serve as a blueprint for key architectural and urban aspects of the masterplan and outlines specifications for various scales of detail that adhere to the original guiding principles of the design, focusing on Health, Wellness, Science and Technology.

The Estonian Centre for Architecture has announced its shortlist of candidates for the sixth international Tallinn Architecture Biennale TAB 2022. The aim of the Curatorial Competition is to find an innovative and responsive theme related to the context of Estonia and relevant to the contemporary world of architecture. The 6th edition was postponed due to the uncertain times that international cultural events are facing because of the coronavirus outbreak.

The TAB 2022 Curatorial Competition received a record number of submissions from around the world. The competition jury selected the finalists out of 26 submissions, who will be interviewed in the competition’s second stage. Raul Järg, the director of Estonian Centre for Architecture and the jury member of TAB 2022 Curatorial Competition, noted that, “the postponement of TAB to 2022 makes the jury process even more difficult as the winning proposal has to not only be interesting in this present day but also be relevant and engaging in two years’ time,” asserts Raul Järg.

“Edible: Architecture that Makes Food, Or, Is Eaten Away” transfers the metabolism and experiential aptitudes of the natural world to the domain of cities and buildings. Curators: Areti Markopoulou, Lydia Kallipoliti. Local Co-Curator: Ivan Sergejev

“Emotionalism” proposes that TAB 2022 serves as the launch pad for an architectural movement called Emotionalism. Seeing humanity as devalued by a never-deepening digitalization, it re-asserts what makes us human through the design of the built environment. Curatorial team: Tszwai Soand Herbert Wright.

“Home” focuses on traditional domains of the home, showcasing new opportunities for social interaction within, on the border of, and in the close proximity of homes. Curatorial team: Eerika Alev, Eva Kedelauk, Kristel Niisuke, Kristiina Way, and Margus Tamm.

Initially planned to be held in September 2021, TAB has now been postponed by one year, with the new Opening Week dates being 7–11 September 2022. The competition will still be held in two stages. Final results will be announced after the second stage jury meeting in August 2020.

We’ve recently passed the halfway point of 2020, and to date, we’ve published hundreds of residential projects featuring distinct ways of living on ArchDaily. In a year marked by the worst health crisis that humanity has experienced in the last century, the Covid-19 pandemic, the house has gained new meanings and values, reiterating that no matter how diverse its program, a home’s purpose is to shelter its inhabitants. 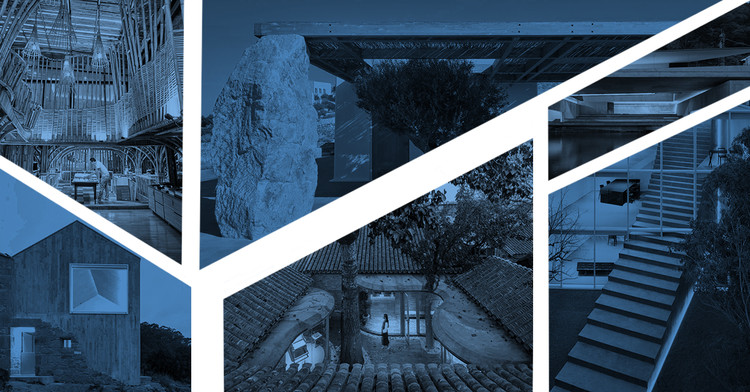 Context, topography, scale, materials, budget and user desires are a range of aspects (and challenges) that define the most varied architectural solutions. It is no surprise that residential works are the most popular project category on ArchDaily. In the list below you’ll find the residences that gained the most interest, featuring the 50 most popular projects across the whole ArchDaily network during the first half of 2020.

On The Water House / Nikken Sekkei

Rehabilitation of a Single-Family Home in Miraflores / fuertespenedo arquitectos

House for a Ceramic Artist / ARHITEKTURA / OFFICE FOR URBANISM AND ARCHITECTURE