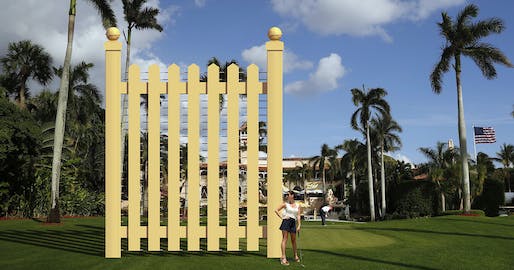 The architects behind the Flying Pigs on Parade project—which planned to install four golden pig-shaped balloons in front of the infamous Trump Tower Chicago sign—are back with another anti-Trump parody, this time mocking the President’s proposed border wall.

New World Projects, the Chicago-based firm known for creating visual commentary on the ridiculous nature of our current political environment, has released renderings and an accompanying GoFundMe campaign for a prototype wall that would surround the Mar-a-Lago resort and golf club in Palm Beach, Florida.

Mocking Trump’s penchant for ambitiously gaudy design, the proposal promises a 30-foot tall, gold finished picket fence on one side, that would be electrified on the other by six new coal plants built along the border. The project’s website cynically describes, “the bad guys on the other side can look through and imagine the riches and moral integrity of being American.”

Throughout the hypothetical scheme, the team has injected dark-humored digs at our President—such as the included detail that the project will “be built with Mexican labor and paid for by Canada.” Similarly, the renderings depict a macabre fantasy. In one, a US Border agent is shown controlling an aggravated dog in front of a full-scale version of the fence. The caption reads, “gold and shiny.”

The catalyst for the parody campaign was Brian Kolfage’s very real crowdfunding efforts to subsidize a portion of Trump’s Wall, which raised more than $20 million towards its goal of $1 billion. New World Projects has jokingly set their ambitions on $570 million, with the caveat that if they should not be able to execute their plans, all money raised will go instead to the International Refugee Assistance Program.