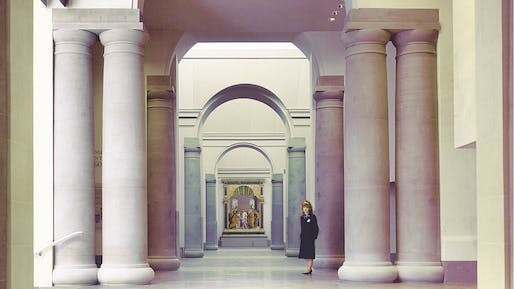 After no one received the prize last year, there was a more positive outcome for the AIA’s Twenty-Five Year Award for 2019. Today, the AIA announced Venturi, Scott Brown and Associates‘ Sainsbury Wing at the National Gallery in London as this year’s recipient. Established in 1969, the annual award distinguishes a building that has gracefully stood the test of time over the last 25-35 years and “continues to set standards of excellence for its architectural design and significance”.

An extension to the historic National Gallery, the 120,000 square-foot Sainsbury Wing houses one of the world’s most visited collections of early Italian and Northern Renaissance paintings. Robert Venturi and Denise Scott Brown‘s practice was selected to design the project after they won the second iteration of an international competition in 1985-86. Completed in 1991, the new Sainsbury Wing sparked heated debate among modernists, postmodernists, and the general public. Some critics thought its facade was a parody of the existing National Gallery, while others like British journalist Simon Jenkins praised it as one of the finest galleries of the 20th century.

Working with associate architect Sheppard Robson, VSBA envisioned the Sainsbury Wing to relate to the National Gallery while maintaining its own modern identity. The design blends modern and classical architectural details: “Corinthian columns and pilasters are folded against the glass edge of Jubilee Walkway, while large square openings and metal columnettes at the entry form new architectural rhythms that spring from the duo’s affinity for Palladio, Aalto, and early Modernism. Made of the same Portland limestone as Wilkins’ building, the wing also observes its cornice height,” the AIA describes.

Its original design is still largely intact with few alterations since its completion. Last year, Historic England granted the wing with Grade I status.

The Sainsbury Wing provides grade access to the entire gallery, and also features an entrance that is accessible to all visitors. It also offers convenient access to exhibition spaces and other museum amenities like an interactive information center, a 350-seat lecture theater, and a restaurant.

As the late Robert Venturi once described, the Sainsbury Wing is “harmony between the old and the new and the varying contexts—via analogy and contrast within a difficult whole.”