One of China’s flagship green cities, Zhuhai strikes a fine balance between innovative, thriving business hubs and ventures for clean energy and green industry. The St. Regis Zhuhai hotel & office tower, the latest addition to the Zhuhai Shizimen Central Business District, is the very epitome of this.

Opening its doors to the public on the 18th of October 2018, the structure has already been recognised by the Zhuhai Government as the tallest building in the city, with the tip towering 328.8 metres above the ground. Local government figures have hailed it as “China’s new architectural landmark”, largely down to its size, environmentally-friendly credentials, plush exterior and the design’s scenic connotations.

After being commissioned by the Huafa Group, who is responsible for the development of the wider business district, RMJM drew inspiration from Zhuhai’s unique rock formations, taking advantage of the surrounding southern and eastern views to design landscapes and gardens which virtually flow into the building, blurring internal and external divisions. The slender build is already a standout sight of the Shizimen development, which is currently undergoing work with the rest of the Zhuhai CBD, allowing it to grow not only financially, but also culturally. 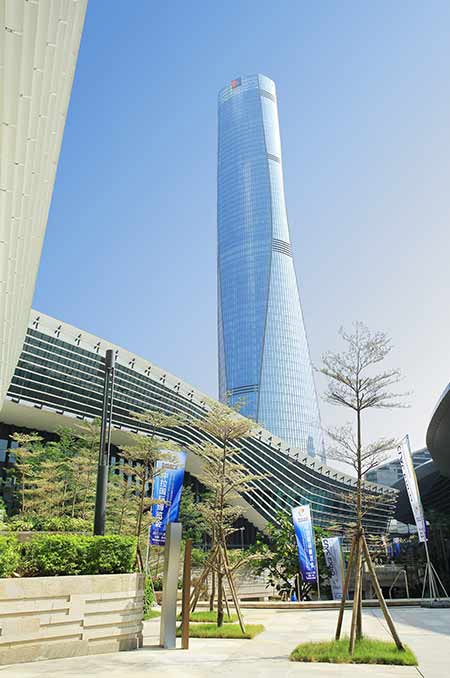 On top of being known for its scenery, the surrounding area is known for its economic prosperity. The Zhuhai Shizimen Central Business District, a coastal area occupying a site of 26.96 hectares, is at the very centre of this. Alongside the hotel and office tower, visitors to the CBD can find exhibition and convention centres which are used as a meeting place for businesses and like-minded individuals from both Zhuhai, nearby regions such as Guangdong, Macau and Hong Kong, and the wider world. Otherwise, visitors will be able to enjoy an international 5-star hotel, a business and retail ribbon and serviced apartment buildings.

It’s no small wonder that, so soon after its completion, the building has made headlines all over the world, being praised for its exuberant, harmonious, but above all, stylish office tower design. Besides the buildings aesthetics, here are three must-know facts about the Zhuhai St. Regis hotel & office tower. 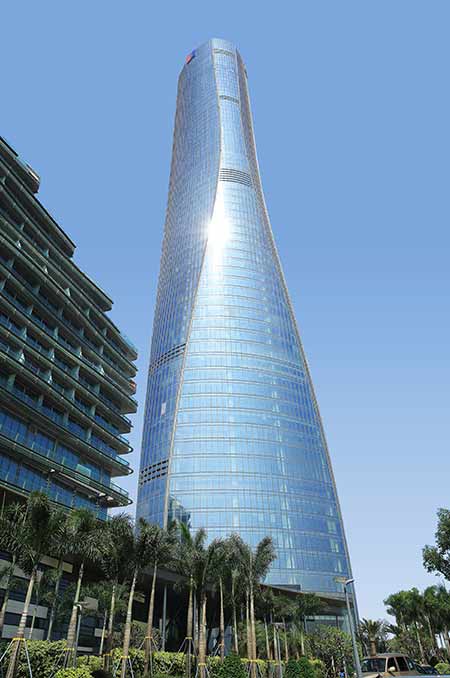 The Zhuhai Tower and surrounding development are built on environmentally-friendly design principles such as shading and orientation, while office spaces in the development are limited to being 18-22 metres wide to ensure natural ventilation. By incorporating environmental screens in the design, the mixed-use development manages to minimise any heat gain which may accrue. Undulating screens are also used in the nearby Sheraton Hotel’s facades to both activate elevation and provide clear open views for guests, which are simultaneously hidden from sight from the pedestrian crossings below.

This highlights the tower’s environmental design values, with all functional spaces (including the car parks) geared towards maximising natural daylight and ventilation. Construction of the tower finished in September 2017, with the finished building comprising a 250-key St. Regis hotel tower and Grade A office spacing.

RMJM’s latest design is one part of the wider Zhuhai Shizimen masterplan, which consists of 640,000 square metres of accommodation. The first phase of the mixed-use development comprises 362,000 square metres of convention, theatre, banquet and exhibition facilities, working to further cement Zhuhai and the Pearl River Delta’s reputation as a modern hub of infrastructure and culture.

As well as these public and civic functions, the development is home to retail and food outlets, serviced apartments and a 548-key Sheraton Hotel, along with the St. Regis hotel tower and inbuilt office spaces.

RMJM’s St. Regis Zhuhai hotel & office tower (or the Zhuhai Tower) isn’t RMJM’s first project in the city, with other key projects including the spiralling 100-metre high Zhuhai Observation Tower (which is still under construction) and the multi-use, 646,500-square metre luxury Heart of Zhuhai development. The tower sits among other notable landmarks, like the Macau Tower and high-rise apartments which have been scheduled to be built across the water as part of the Shizimen development.

Thanks to its success, the Shizimen CBD project has triggered the development of the entire Hengqin area, in what is set to be an exciting new era of construction for southern China.  Learn more about the St. Regis Zhuhai hotel & office tower and browse related projects in the portfolio section of our website.

View the catalogGo to the DELTA LIGHT website for more information

They say one cannot separate art from the artist, or perhaps in this case, the artist from the architect. Arguably one of the most criticized architects, Le Corbusier is often portrayed as cold and controlling. Depicting his more dreamy and humorous nature, the Nasjonalmuseet‘s exhibition titled, “Le Corbusier by the Sea,” draws upon his memories from his summer travels along the coast of southwest France.

Hosted in Villa Stenersen, one of the National Museum’s venues, the exhibition showcases Le Corbusier’s work as an artist during the period 1926-36. Not only does the exhibition include fifteen of his reproduced paintings alongside a collection of sketches, but also screens two films from Le Corbusier’s own footage of his surrounding views.

Like most creative minds, Le Corbusier had a special place to find inspiration. Le Piquey, his treasure trove for ideas, was a place where he simply became Charles-Édouard Jeanneret again, sketching incessantly and freely. Once he arrived back to his Parisian studio, he would rework his drawings into paintings, cementing his thoughts to canvas.

As a co-creator of the Purist style, Le Corbusier’s paintings depict his fascination with the geometries of mundane objects to either emphasize or deconstruct typological forms, informing his early architectural studies. The curation of the artwork from his time spent specifically at Le Piquey aims to highlight how often he drew inspiration from nature and the environment around him. Lesser known is the extent to which these influences impacted his architectural style and even choice of materials.

I am drawn to places where people live naturally. Le Piquey is full of life that is healthy, calm and to scale: to a human scale…This is what civilizations destroy, plunging people into artifice and misfortune.
– Le Corbusier in a letter to his mother, 1932

Whether liked or disliked, Le Corbusier still remains a deeply faceted individual in the scheme of his larger public identity. Perhaps he only wanted a simple life by the sea, or perhaps the short-lived escapes from the city were enough, but in either case, Le Piquey served as an integral part in formulating his architectural ideologies.

The exhibition curated by Bruno Hubert, Tim Benton, and Talette Simonsen will run until December 16.