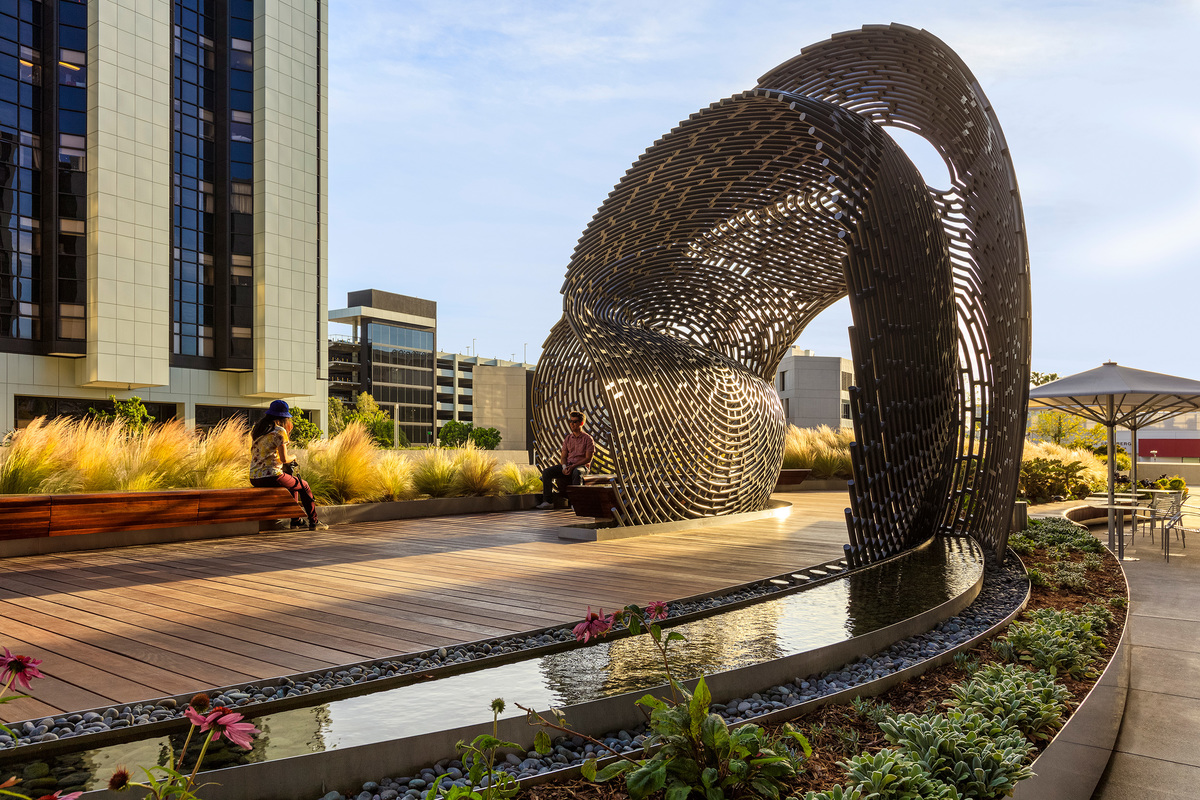 It’s rare that underused structures in Los Angeles get a second chance at life, with most developers opting for the wrecking ball instead of an innovative redesign. In the case of an underused public terrace at the Max Factor Building at Cedars Sinai, Ball-Nogues Studio (who spoke to Archinect about this design at the Arroyo Seco Festival) has transformed the space into a destination spot with their signature blend of eye-catching aesthetics and nuanced materialism in the form of the “Healing Pavilion.”

Ball-Nogues Studio has been playfully enhancing Los Angeles for over a decade with a variety of engrossing, yet contextually appropriate, installations. There’s the pendulous group of steel balls called “Cradle” that’s suspended from the revamped mall on Santa Monica’s 3rd Street Promenade, or “Corner Glory,” a vibrant conceptual halo of mirror polished stainless steel and spikes on an apartment building on Santa Monica Bouelvard and La Brea Avenue. Regardless of its locale, each Ball-Nogues installation manages to visually enliven its surroundings without overwhelming them. 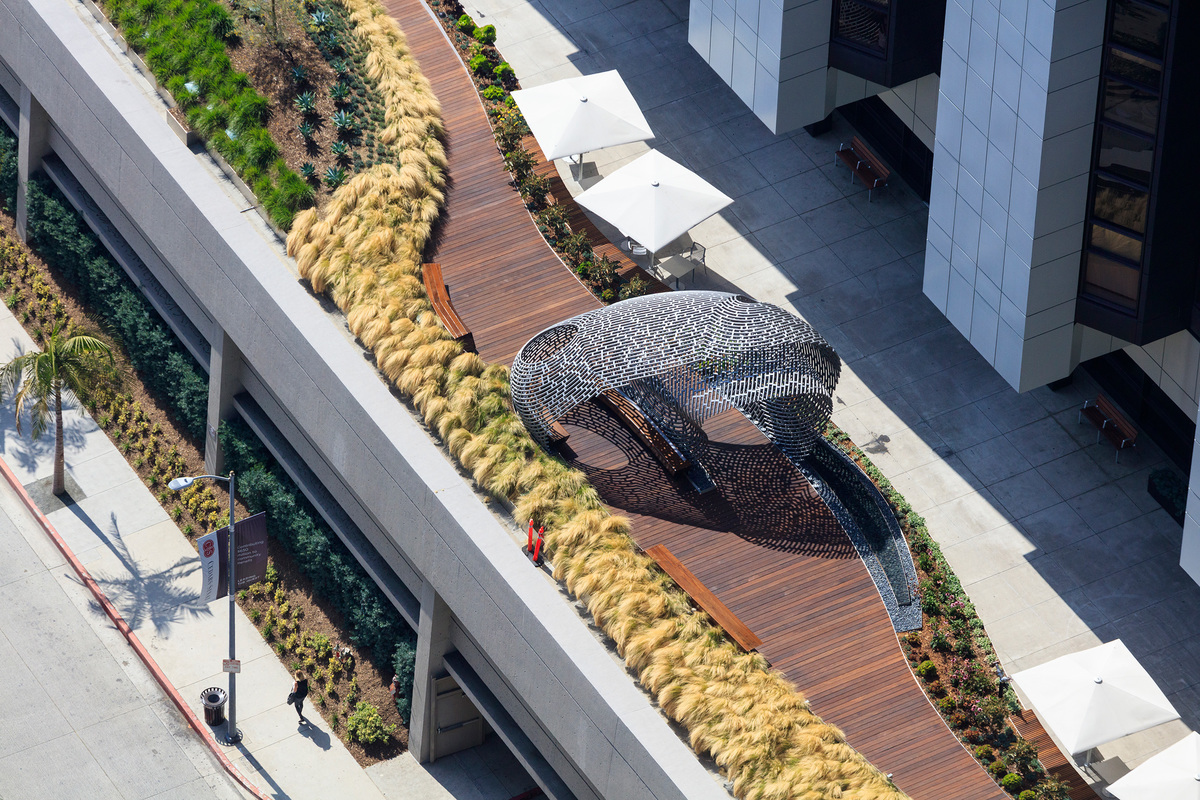 The Studio’s installation at Cedars Sinai, known as the “Healing Pavilion,” works both to draw attention to the space while distracting visitors from thoughts of illness. In this way, it functions as an ingenious take on public space; although visitors can inhabit the structure alone, the idea is not to privatize the experience of dealing with difficult times, but rather to transform them into something of shared aesthetic worth and value.

When asked if the studio was excited by the idea by taking an underused public space and transforming it into a vibrant and creative site, Benjamin Ball said, “We were definitely excited about the prospect of helping to transform the space and while it was indeed underutilized and an opportunity waiting to be fulfilled, we were primarily drawn to the project by the prospect of making a place for that contributes, in its own small way, to the process of healing. This was a new framework to put around our process and, consequently, it changed how we saw the work. In collaborating with AHBE and the client we were working together to make a place that can, if only for a moment, take one’s mind away from the stress that accompanies illness.” 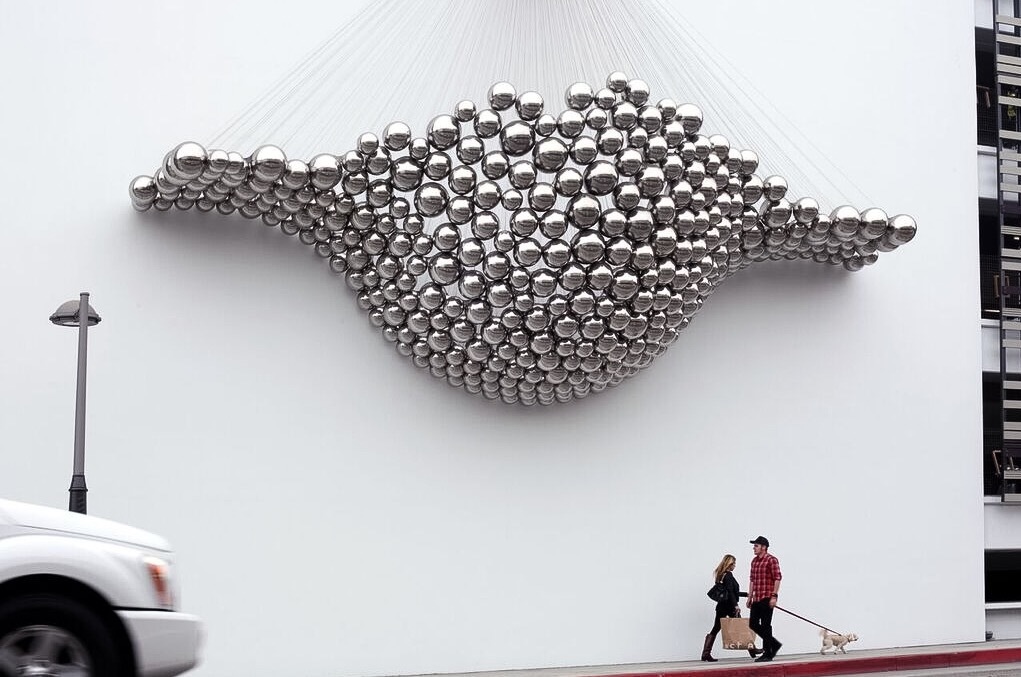 The structure is composed of 352 two-inch diameter mild steel tubes that, according to the architects, “has no hierarchy in a traditional sense. There are no extraneous elements.” The tubes were bent using Ball-Nogues specially calibrated rolling system, which is controlled by a computer. The installation process for the work was also a study in creative logistics. As the architects explain, “Flanked by hospital towers on three sides, the sensitive location demanded that no field welding or finishing could occur on-site. The project had to be completed within seven months, installed in a single day, require no routine maintenance, and meet seismic, wind load, and ADA requirements. In order to address ventilation and noise concerns, the Pavilion was fabricated and finished in its entirety offsite. Overall dimensions of the form were kept within the size specifications needed to qualify as an oversize load for transport. The piece was driven as a singular object via flat bed truck over city streets to the site and then craned into place.”

The resulting structure constantly reacts to its environment

By virute of its numerous tubes, overlapping segments, and overall shape that appears narrow from one vantage point and thick and bulky from another, the resulting structure constantly reacts to its environment. During the day, elaborate networks of shadows form on the sidewalks, while at night the light from illuminated benches and walkways interacts with the steel to produce fascinating, quasi-illusory forms. It’s a perfect setting to inspire the imagination of an exhausted loved one who needs rejuvenation after a grueling day of dealing with illness.

In concert with ABHE Landscape Architects, who added a series of gardens to the redesigned terrace, Ball-Nogues’ work on “Healing Pavilion” has revived this exterior section of the hospital, creating not only a dazzling distraction, but a likely new landmark. 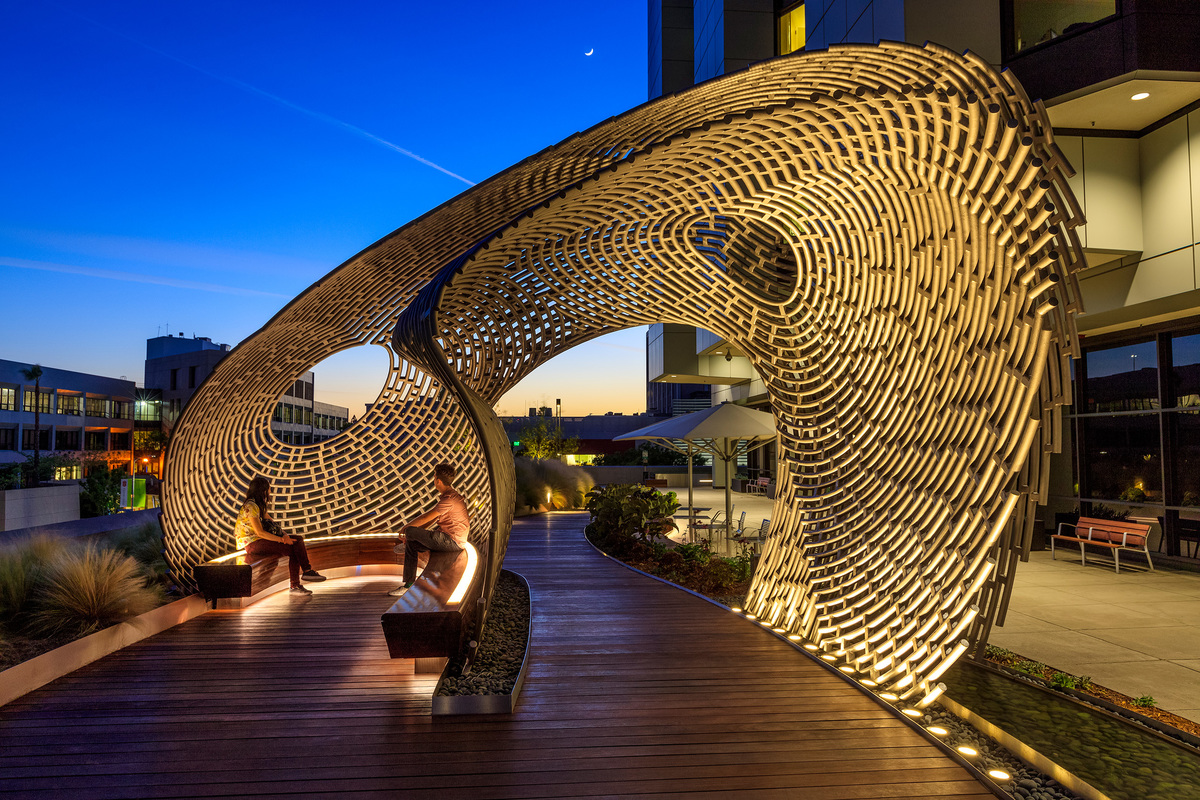